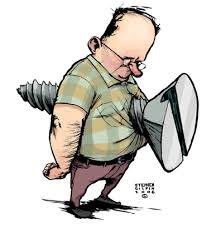 We had an appointment for Sean with the specialist at 16h30 this Wednesday afternoon.

Sean presented a synopsis of his knee problem to the specialist. He asked for the X-rays, but they were supposed to be sent up from the trauma unit and had not arrived.

Then on to the bed for an examination. On Saturday, the doctor in the trauma unit had immobilised his knee, first with dressings and bandages and then a knee brace. He had been instructed to stay on the crutches and not to put any weight on the leg. Result – one very stiff knee when the brace came off!

“I’m sorry but I can’t look at the knee like this. I need you to bend it at least 90 if not 120 degrees!” said the specialist. “You’ll have to come back next Wednesday. In the meantime, please see the physiotherapist.”

All of this took ten minutes.

So, before leaving, we made another appointment with the receptionist.

“Aaaahhh,” I shouted, “I think I’ve been screwed!” In my next life I want to come back as a doctor.

Tartar builds up on my teeth at an alarming rate. Brushing, flossing, electric brushing, whatever, simply doesn’t help. It continues to build up. So, I used to have my teeth cleaned by the oral hygienist on a six-monthly basis. I say used to, because recently I haven’t been – and simply because I have other priorities that now take up my time!

But last Wednesday, I really needed it. When your mouth starts feeling and tasting like a sewer – that’s when you need the cleaning most! So, I called to make an appointment and was told that Sabeth Rautenbach could see me within the next half hour!

This time was a really special visit to her. She was the last person I saw in Port Elizabeth on 7 February 2007 before flying to see Prof Carr at Tygerberg and getting the News. After she had cleaned my teeth on that afternoon, I had headed straight to the airport and off to Cape Town. I was all excited, because, at long last, I was going to see someone who was going to sort out all those funny feelings that I had been experiencing for the previous six months. Little did I then know what lay ahead.

Well, as I said, my teeth really needed a good cleaning. So there I lay in her chair staring up at that circular dim yellow light above me. The one she moves around from time to time so as to be able to look into all those what must be really ugly and dirty places. Against the ceiling, the snow-white tubed fluorescent lights hummed away.

A few times I dozed off. She scraped and scratched away with her silver pick, tooth after tooth, removing all that hard tartar that had built up. Then came the polishing machine and the dental floss. Despite the suction pipe gargling away and sucking out the saliva and blood, I could still taste the blood in my mouth. So I was quite relieved when it came to the rinsing out stage and I could get rid of all that gunge. Then the tickling part – that’s when she takes her brush and gently paints each tooth with fluoride. In a way, that’s the most uncomfortable part of the procedure – all that tickling of the gums that takes place.

After 30 minutes, it’s all over. I now have the cleanest and whitest teeth – for a while at least. And, as I leave, I informed her that, if I was still here, then I planned to be back in six months time for yet another clean. If I’m no longer here, I’m bound to have the whitest teeth in Heaven when I get there.

Well, this has been the week with the medical profession. Phillip had broken his finger playing rugby and his splint, put on at St Georges’s Hospital a few weeks ago, came off. He’s not known as Dr Phil for nothing, as he had basically taken care of his own recuperation!

On Saturday afternoon, I had to take Sean to St George’s after he had injured his knee in the game against St Andrew’s College. He has been struggling with it since the game at Queenstown, and has since seen Dr Butters and been on antibiotics and anti-inflammatory tablets. But he hurt it again on Thursday at practice and in the game on Saturday.

So more X-rays (nothing broken!) and more tablets are prescribed. Splints, bandages and crutches seem to define the rugby season. Back to see the doctor on Monday morning (the swelling has subsided somewhat) and off to see the orthopedic surgeon on Tuesday afternoon. We wait in anticipation for the diagnosis.

And then to crown it all (excuse the pun!), Pera loses a crown and a tooth disintegrates. So, she went off to see Dr Alisdair Brown (an ex-pupil of mine and our family dentist) on Monday afternoon. One tooth extracted later!

I’m not sure how families cope without a medical aid scheme. Every medical visit is a costly one – as they say in Afrikaans “hoes en betaal”! (Cough and pay!). I’ve heard other versions, too! The medical savings account is fast becoming depleted and there are still seven months left of the year before it gets replenished. Once it’s finished, it’s down to your wallet. And after each visit then it’s open wide and say AAAh!