Saturday 15 May 2004: In Berlin, Sepp Blatter announced to the World that the host country for the 2010 FIFA World Cup® would be South Africa. I was sitting in the casualty department at St George’s Hospital with Sean after he had broken his hand playing rugby. We heard the announcement on the radio.

Friday 11 June 2010: In Johannesburg, at Soccer City, South African President Jacob Zuma declared to the World that the 2010 FIFA World Cup® was officially opened. Pera, Sean, Phillip and I were sitting at the Brazen Head in Stellenbosch watching, on TV, the opening ceremony and the first game between South Africa and Mexico (draw 1 – 1)

Friday 18 June 2010: In Port Elizabeth, at Nelson Mandela Stadium, the Lunnon family, and 38 000 others, were at the 21st match of the 48 group matches between the qualifying 32 nations participating in the 2010 FIFA World Cup®

It seems difficult now to believe that prior to 1994 we were the pariahs of the world. We were banned from all international events and, I’m not sure how they managed it, but in the early nineties the only international sport we still saw on TV was the Wimbledon Open. The sporting highlight of the year was surely that annual Sunday afternoon when we could get together with our friends and watch the Men’s Final – complete with strawberries and cream!

One of the first and immediate changes in the New South Africa was our re-admission to World sport. I remember the poor quality of the TV transmission when watching the first test after re-admission of our cricket tour to India. But, it certainly didn’t matter, because we were back in the World!

Now, we have a feast of World sport – so much so, that two weekends ago we had the historic situation of France playing rugby and football on either end of Cape Town. And, as I write this, TV – now in HD – offers the following choice: the Proteas are playing cricket in the West Indies, South Korea is playing Uruguay for a football quarter final place here at the Nelson Mandela Stadium in Port Elizabeth and the Bokke are playing rugby against Italy in East London (whilst their counterparts, the Italian Football team – the current FIFA World Champions – are back in Italy after the shock of tumbling out of the opening group matches!)

Looking backwards now, we successfully hosted the ICC Cricket World Cup in 2003 and in 1995, barely a year after South Africa became a fully democratic Republic under President Nelson Mandela, we hosted (and won!) the IRB Rugby World Cup.

I recall the opening of that event in June 1995 at Newlands in Cape Town, when the Springboks faced and beat Australia. I was working in East London on that Wednesday. At lunchtime, we headed back to the Pick ‘n Pay regional office to watch the game. We experienced the normal after work rush-hour traffic at 14h00 as everyone headed off home or elsewhere to find a TV set to watch that opening victory!

No beers were to be drunk watching the game – after all, it was still working hours! But, as the excitement built over our impending win over Australia, the beers were opened and the partying carried on well into the night.

And the partying continued throughout those three weeks – as the Springboks progressed through the tournament via the lights-out, darkened stadium and the Battle of the Boet versus Canada in Port Elizabeth, to the almost rained-out, deluged and helicopter dried semi-final against the French in Durban and into the final against New Zealand’s All Blacks at Ellis Park in Johannesburg on 24 June 1995, 15 years ago almost to the day.

We won that game 15 – 12 in extra time and became the World Champions.

I have seen THAT photograph of Stransky’s drop goal in every boardroom in South Africa. I have seen the video footage of that spine-chilling Jumbo Jet Boeing 747 flying just above the roof of Ellis Park with “Good luck BOKKE” written on its fuselage. Most people have now read the book Playing the Enemy and seen the movie Invictus (based on the book), which tells the story of that game, the build-up to it and the legacy it left our country.

But I have never seen that game! Only because Phillip (at 24 weeks in Pera’s tummy and only due in September) decided on that Saturday morning that he, too, wanted to watch that historic game.

So, we spent the day at St George’s Hospital, with the doctors battling to keep him in! They won! And at 10pm that evening, when I drove home up Cape Road, and I saw all the partying going on in the streets, I knew that the Bokke and South Africa had won. And Pera, Sean and I won again, two weeks later on 7 July, when Phillip made his determined appearance at 26 weeks. Now, as we prepare to celebrate his 15th birthday in two week’s time, his 1,86m body makes it difficult to believe that he entered this world weighing just 1,3kg! (His birth made up for our sad loss of Phillip no 1 who had been stillborn at almost full term in 1994.)

But all of this is history now. After I was diagnosed in February 2007, I had often wondered whether I would still be here in 2010 to see any of this World Soccer Championship. And yes, here we were, Friday 18 June 2010 and we were headed to watch our first live game of the 2010 FIFA World Cup ®.

Much has already been written about this spectacle (see my own humble contribution in my previous blogs Oh What A Circus, Ka Nako ,Gees Recipe) and much more will still be written. At this point, suffice to say, that if we thought that the 1995 Rugby World Cup made a positive difference to our fragile democracy, then the legacy that this Tournament is carving into our society, pales that difference into insignificance!

The family and Barbara (our domestic help) left home at 10h45 – destination:  Port Elizabeth’s magnificent first completed Nelson Mandela Bay Stadium. We were dressed in our Bafana Bafana shirts and colours of yellow and green. Armed with our rainbow nation coloured blankets, scarves and vuvuselas, we were off to watch Germany beat Serbia (or so we thought!) in game 21 of the tournament. 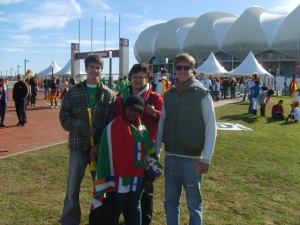 The logistical arrangements were faultless. After parking the car at Andrew Rabie School, we took the appropriately marked Kwela Kwela taxi to North End. Then followed a short walk to the stadium. Extremely courteous staff scrutinised our “cheap” category 3 R560 tickets and searched our bodies. We were of the first spectators to be seated in our 6th tier seats with an amazing view and still two hours to kick-off at 13h30.

Even the fact that FIFA was doubling the prices and fleecing the captive spectators at R30 for a Bud, R20 for a pie and R15 for a Coke did not dampen our spirits. As the advertising campaign had urged us for months now – “We had booked our seats in history”.

The turf was watered, the stadium filled with 38 000 spectators, and the two opposing parties inspected the turf and warmed up. Then, with military precision, the teams entered the arena at 13h20, national anthems were sung and the game began!

After 90 minutes and a few extra, the excitement of the game was over. Serbia surprised and beat gallant Germany 1 – 0!  We left our seats at 15h20 and reversed the procedure we had followed just 5 hours earlier.

Together with all the jubilant others, we walked to the bus, travelled to the school, got into our flag-bearing car and drove home. And, saluting the organisers, at 16h00, barely 30 minutes later, I was seated in my lounge in front of the TV ready to watch the next match 22, USA versus Slovenia at Ellis Park in Johannesburg (the same stadium as the 1995 Rugby World Cup final!)

They drew 2 all! There was no winner here. But, as had been said so many times before in these last two weeks, the winner must surely be the citizens of the enigmatic Republic of South African who have made this miracle possible. They have made Africa proud. They have turned the ordinary into the extra-ordinary!

Because I have been granted extra time, I can also say, “I was THERE!”

And, as South Africa now sets its vision on hosting the only big games left that it has not yet hosted, those of the Olympic Games of 2020, dare I hope for so much more extra time . . . .? 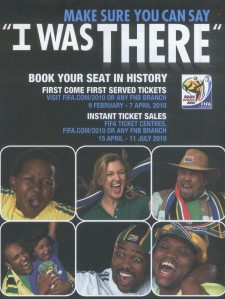