We were privileged to interview Lewis on Friday 20 August 2010 in the AlgoaFM studio in Port Elizabeth.

If you missed his breakfast , this is what he had to say:

Here, in South Africa, we celebrate 1 September as Spring Day – the start of the Spring Season. New life!

Today, “ED is in wED” airs for the 21st time on AlgoaFM. Many happy returns!

On the first Friday in September, this year 3 September, we celebrate Casual Day and people are encouraged to dress casually to work and school. It’s a FUNdraising project of the National Council for Persons with Physical Disabilities in SA to raise funds and to show support for those of us who live with disabilities. The theme this year is Dress for Laughs and the target is to raise R20 million for various welfare organisations. Let’s all support Casual Day and buy our R10 stickers at ABSA or other retail outlets, and celebrate good health and show our support!

I celebrate my real birthday this month. Another birthday!

I also celebrate four years of living with CBD. It was in September 2006 that I first detected the symptoms of this degenerative disease that has since slowly been eating away at my body. In February 2007, when the illness was diagnosed, I was told that I would become severely incapacitated within three years. And just look at me now – that is reason to celebrate! Another year!

Last Saturday, when I landed at Cape Town airport for my visit to Stellenbosch, as I turned on my cell phone I received the news that my Aunty Elsie had passed away that morning. She was the wife of my father’s second eldest brother, the late John ‘Guy’ Lunnon.

After retiring as postmaster in Caledon, my grandfather Walter Charles Lunnon arrived in The Strand in 1935 with his three daughters (my aunts) – my father and his two brothers were already working and living away from home.

I had moved to Port Elizabeth and that left my youngest sister, June Lunnon, in the town.

And Uncle Guy and Aunty Elsie had retired to The Strand and kept the name there. My cousins, their daughter Margaret moved to Bristol, England, and their two sons William (Bill) Lunnon moved to The Netherlands and Michael Lunnon to Napier, New Zealand.

Uncle Guy passed away in 1992 and, since then, only my sister June (unmarried) and Aunty Elsie had kept the name alive. June left for Auckland, New Zealand some two years ago and Aunty Elsie passed away last Saturday, 21 August 2010. The Strand Lunnons had come to an end.

But, last Friday 27 August, we attended a memorial service at Benadehof where she had lived for the last 18 years. My cousin Margaret and her daughter Sally came back from England, and Michael returned from New Zealand.

Michael spoke so eloquently of his mom at the service – that kind, gentle, grey-haired lady who, paradoxically, had made hand grenades during World War II, and who had been part of my life for 54 years. She, and Uncle Guy, had been especially kind to our family after my dad had been paralysed by a stroke way back in 1969.

After the service, Michael, Margaret, Sally and I joined Aunty Doreen (now my only surviving nee Lunnon aunt – the last of the six Lunnon siblings) and Uncle Peter Volsteedt for lunch at the Kaapzicht Restaurant in Beach Road, Strand.

Michael and Brenda’s son, Alistair, now living in Montana, USA, and our sons, Sean and Phillip, now living in Port Elizabeth, will carry the Lunnon name forward. A new generation! 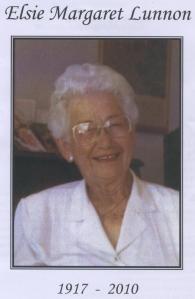