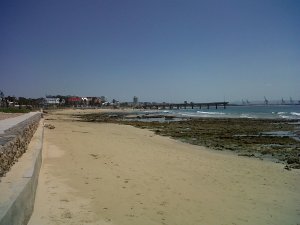 Yesterday, I spent most of the day with the electricians. A while back, our house must have been struck by lightning and since then we have had ongoing problems with the electrics. The house has been something like my body – the circuitry has just not been working properly leading to all kinds of strange effects!

First the plugs in the kitchen weren’t working and that was sorted out. Then the washing machine kept tripping the earth leakage. And then, the other morning, I showered in the boys’ shower and discovered that when I touched the taps I was feeling a light electrical shock in my fingers! So the electrician was called back again (I think they thought I was really mentally ill because they could not feel it and their gadgets did not register any current!) Anyway, they replaced the element in the geyser and did some earthing work in the roof. The tingling feeling disappeared.

But, lo and behold, when I showered the next morning, it was there again! So back they came yesterday and spent the day with their gadgets, meters, wires and electrical brains. By the time they left late yesterday afternoon – problem solved! – I was quite tired just from providing my input in what the problem could possibly be. So I had a lie down from 5pm to 7pm – then had supper, and then slept from 21h30 through to ten this morning! I don’t think I have ever slept so much and yet, the tiredness doesn’t appear to go away. It appears that my body needs more and more rest and I need more and more sleep.

I was woken up by the electrician to find out if everything was in order. Well, I was still in bed and hadn’t even showered yet! So I got up with difficulty and headed off to the shower – this time, no tingling! But after a while I also realised that there was no hot water! After all the work they had forgotten to switch on the geyser!

But, thank goodness, today it was HOT! It was really HOT! In fact, at 14h00 the thermometer in my car said it was 38 degrees C outside.

So I decided to go to the beach for a walk (Dr Doidge firmly believes that brisk walking rejuvenates brain cells, and walking had certainly been good for me in Ireland and England).

So walking has been added to my list of activities. Yesterday morning I walked the golf course. Today it was the beach.

What a beautiful day: not a breath of wind and this incredible heat. I started at Hobie Pier and walked to Pollock Beach and back.  Then had a swim – the water was quite cold but refreshing! It was great getting out of the house and the exercise did me good – both physically and mentally. So much so, that when I got home I had another swim in the pool and then headed off to the gym for a thirty minute cycle and a ten minute run on the treadmill. I really need to do this more often. I know it will go a long way in keeping the happy hormones going and making me more positive.

Tonight, we are experiencing yet another electrical storm. Please lightning don’t strike the house again because I’m still fighting with the Bank about the last claim! I don’t choose for the lightning to strike our house but somehow they (being that unfriendly lady in their call centre who only answers after 15 minutes and many computer-generated questions later!) think I do, and now they call me a storm risk and want me to pay exorbitant excesses on my claim. Anyway, I thought that’s the meaning of the word insurance and the reason why one takes it out – for when the storms of life hit you. It’s sometimes more difficult dealing with the Bank (their invisible call centre wherever it may be with unfriendly people who don’t talk English!) than it is dealing with my CBD!  They really have strange Standards! I wonder if I can deduct the cost of my phone calls from the bank charges they charge me?

Anyway, I am really moeg tonight … must be all the exercise. So it’s time to sign off, have my nightly pills, read my Faith for Daily Living, and then have another look at that Insurance policy fine print (and don’t forget to thank God – and Spec-Savers –  for my new specs – it really makes it easier to read that fine print, but pity it doesn’t make it easier to understand it, too!)

2 comments on “Life’s A Beach”