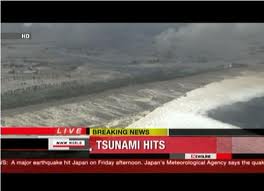 Just last week I wrote that we Live in moving times. And we discussed this on air last Wednesday. Little did we know then that within the next 2 days, we would witness the earth move in one of the world’s strongest earthquakes ever (at 8,9 on the Richter Scale) in Japan. This would be followed by a moving wall of water in a tsunami that would strike Japan’s northeast coast (and elsewhere in the Pacific rim) and cause unprecedented devastation.  As I write this there is the further possibility of a nuclear disaster at one of the Japanese nuclear power plants.

Moving scenes of human tragedy continue to unfold by the minute, and it will be days, weeks and months before the full impact of this devastating tragedy is fully assessed.

I also wrote recently about my thoughts on sport (Love All) and how I found it astounding that it could do so much for the human race.

And, somehow, those two stories I had written over the last two weeks, were pulled together in my mind this afternoon, as I sat watching South Africa defeat India in the Cricket World Cup tournament presently taking place on the Indian subcontinent.

In Love All I asked the question “Why do we get so motivated watching grown people move a ball around on varying playing fields?”  In a certain way, I suppose it’s because we can admire the athleticism of other people doing things that we possibly cannot do.

When you look like losing, have been written off and labelled as a choker, when the peaks look insurmountable and the challenges impossible, that’s when the individual finds it within himself to persevere, to take all he’s got, to hit fours and sixes, to run faster, to aim higher, not to give up and, eventually, to become a winner.

That’s when you make the impossible possible! And that’s what spurs the human race onwards and upwards.

We saw it in the cricket this afternoon.

We see it after every human tragedy – how people pull together, support each other, persevere  in the face of adversity and, against the odds, become better human beings and in the long run, become winners.

I have seen that grit and determination in so many people that I have met over the last few years since I have been ill. People who fight their own personal tsunami’s and ‘quakes on a daily basis. There are the Tim Whites, the Deidre Kohlers, the Belinda Waltons of this world (and so many others) that take on the challenges that life throws at them and become winners.

They show me that it can be done. And, so this week, as I tackle the challenges of meetings with doctors, the nurses from Hospice (who so kindly give of their time to visit and talk to me), the refitting of a suitable chair for me, my living will and all the other things that come with this illness, I give thanks for so much that I have, and for the many privileges that I enjoy.

I shall pray for so many Japanese people that tonight have nothing.

Belinda Walton signs off her e-mails with a quote by Helen Keller. It reads:

“The marvellous richness of human experience would lose something of rewarding joy if there were no limitations to overcome. The hilltop hour would not be half so wonderful if there were no valleys to traverse”.