Please read these articles on fracking by clicking on the article:

Fracking not the solution

The holiday agenda for the week was penciled in as follows:

(Plus a list of people to see and things to do – if time allowed!)

I am busy inking in the gaps… in the meantime, look at some of the pics on the earlier blog!

Our trip back to Port Elizabeth was scheduled to commence on Friday. However, we planned to take a leisurely drive and to stop over in Montagu for the weekend. The Ridgways were to accompany us and to act as our tour guide. Unfortunately, it was “month-end” in the accounts department at the Mount Nelson Hotel and Michelle could not go. So Sebastian and almost one-year old Hannah did. (It was amazing to see Sebastian look after Hannah – I never was such a good father!)

After packing and saying goodbye to our flat and The Strand, we left, as scheduled, at 08h30 and headed through Stellenbosch, Paarl, the N1 north through the Huguenot Tunnel and on to our first stop in the Slanghoek Valley outside Rawsonville.

The farm OPSTAL is owned by Stanley and Ria Louw. Stanley was at Stellenbosch University with me when I was an undergraduate student. He was also in Helshoogte and served on the House Committee. He is married to Thomas Moolman’s sister Ria (we had been staying in Thomas’s flat in The Strand.)

Rawsonville has special memories for me. I visited the Moolmans often there (and at their caravan in Gordons Bay when they camped during the summer holidays). I also spoke at Thomas and Marzeth’s wedding in the church hall in 1983 and it was the town where my very first brand new car was written off on a trip back home from Infantry School in Oudtshoorn when I was doing my military service.

But I had not yet visited Opstal.

So we stopped over for breakfast – a big farm one! – and our first wine tasting of the day. Unfortunately, Stanley was in Worcester and we did not get to see him. However, in the midst of preparing for a weekend Slanghoek Valley Wine Festival, we were graciously hosted by Ria.

It set the tone for the rest of the day (as can be seen from the photographs accompanying these blogs!)

Our next stop was the Klipdrift Brandy distillers in Robertson – “met ys!”- and then on to the wine farms along the Breede River valley between Robertson and Bonnivale.

Farm after farm, wine after wine, sip after sip and taste after taste, we moved through the valley and through the wines – the dry and the semi-sweet whites through the rosés and the red Cabernets and Pinotages, and all the other special wines and the cheeses, too, where available!

We visited Bon Courage, Van Loeveren, Excelsior. I’m not sure if it’s the wine or the CBD that makes the names fade into oblivion now.

Each farm has something special – that little extra thing to make it unique – whether it be a cheese platter, a snack, a river cruise, or a donkey cart.

Sean, Phill and I especially enjoyed the opportunity at Excelsior to blend and bottle our own wine – Excelsior Our Own Creation! The challenge now is do we keep it or drink it! 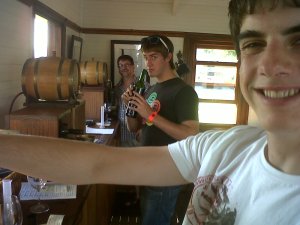 Bacchus would have been proud of us. The day moved into a haze of splendour and by late afternoon, it was time to head off to the Spar in Montagu and stock up on provisions for our braai at our overnight weekend guest house in the Koo Valley, north of Montagu.

What a spectacular valley that has escaped me, and I guess many others, all these years. 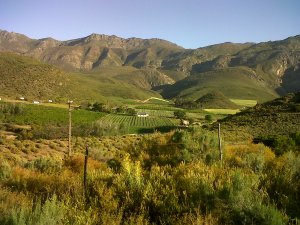 Most of us, I would imagine, are familiar with the name Koo and Langeberg – being the brand names of canned fruit and vegetables that have graced our kitchens over the years and that we all have eaten somewhere along the line.

Langeberg, of course, means “long mountain”. It’s the range that runs parallel to the Indian Ocean coast all the way from Robertson to Swellendam and beyond. The Koo (Khoisan for “cold”) is a valley between these mountains and the next range that forms the border with the Great Karoo. The road that runs through it links the R62 at Montagu with the N1 at Touws River. It is in this valley that we find the fruit and vegetables that go into those cans!

The scenery is magnificent, and would become even more clear to us on the following day when we ascended the mountain.

In the meantime, in the quietness of the setting sun and the darkening sky, we braaied in front of our cottage at Oak Guest Cottages, and called it an early evening! Saturday belonged to Protea Farm. 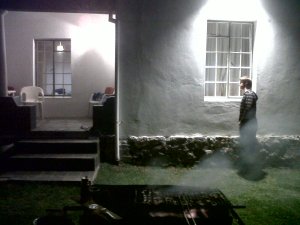