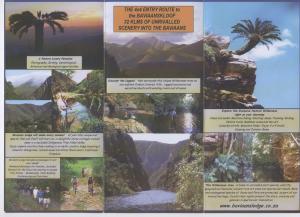 Some two weeks ago, the day before I went to Wynberg for the weekend, I received the following email from Mike Proctor-Sims via Lance du Plessis at AlgoaFM:

Mike Holmes and I were fishing last weekend. Standing on a beach, rods in hand, with the fish not biting leads to lots of chatting and Mike came up with something you might be interested in. Holmes and I have a mutual friend who owns and manages the Baviaans Lodge, which straddles the Baviaans and Kouga mountains and various kloofs. Rob is an avid environmentalist and has built his lodge, which borders on the Baviaanskloof Wilderness Mega Reserve, using eco-friendly methods.

Mike was talking about this guy you have on your programme once a week who is suffering from an incurable disease and using his remaining time on earth to discover wonderful places, mainly in hte Eastern Cape. I have heard him on your show once or twice as well. Mike said the guy had mentioned that the Baviaanskloof was one such venue he would like to experience. I have spoken to Rob and he would be delighted to host him — you as well if you can get away.

The main feature is the natural beauty. Cycads, fynbos, indignous forests, streams, Bushman caves and really nice rustic accommodation to are the more sedate features while more challenging are river rafting and boating on the Koaga river and the 4X4 route that runs between his lodge and the main road through the Baviaanskloof, the dirt road joining Patensie and Willowmore.

There is a time factor involved if you are interested in a visit. The weather is good at the moment, neither too hot nor too cold but the cold is imminent.

This e-mail set in motion a sequence of events, further e-mails, SKYPE conversations, plans, “unplans”, replans and final plans that saw Sean and I set off for the Baviaanskloof on Saturday afternoon for an overnight stay at the Baviaans Lodge.

Unfortunately, to get all the parties involved to be able to co-ordinate diaries became a mission impossible.  Being a “pensioner”, I’m the easy one! Everyone else had “things” to do, but I am dependent on a driver and Sean was only available on Saturday afternoon after work.

My memory fails me often nowadays, and we actually left home twice! Firstly, after filling up with petrol, my petrol card had expired and couldn’t be used! I’d pay with the credit card then, only to find that my wallet wasn’t in the car. So then Sean paid and I’d refund him – we went back home to fetch the wallet – only to find it was under the car seat all along!

We had no sooner left Port Elizabeth along the N2 and I was telling Sean about a warning light that had gone on in the bus to Cape Town the previous week, when the self-same light came on in our Jeep Wrangler! So we stopped at Jefferys Bay and so did the warning light!

Then we went westwards along the Langkloof’s R62 to Kareedouw where we picked up two of Rob’s sons at the school hostel to take them with us to the Baviaans Lodge, our accommodation for the evening and their home.

We went back some two kilometres along the R62 to Assegaaibosch Station and then some 40 km north westwards to the Lodge. Despite only being 40km, the road winds up and down and round and round over the Kouga Mountains and River and so it took us about an hour and a half to get there at about 17h00.

Along the way, the view is stunning and the wow’s became Wows became WOWS! The final descent into the Valley of the Lodge is an OMG WOW WOW WOW!!

No words can do the area justice – hence the pictures attached to this blog should tell the story, and even then, they often don’t tell the full story.

We met Rob at the Lodge, then were shown to our cottage and after unpacking and freshening up, returned to the lodge for a chat, drinks and supper.

No electricity, no TV (to watch the Kings – TG we only heard the score the next day!) but only paraffin lamps, chatter, red wine and a meal fit for the Kings – onion soup, herbed chicken and malva pudding with hot custard made us ready to hit the sack and settle down under the duvets on a dark, quiet, chilly, crystal-clear evening up in the mountains.

The only light outside was the wispy white constellations of the Milky Way – gazillions of shimmering stars, suns, planets, galaxies, shooting stars, and all those other things of which I comprehend so little. It’s all too much for my little pea brain to understand – I don’t even try to understand – but I can and do appreciate the beauty and the Godliness of it all! I wonder sometimes when the time will come when I, too, will be glistening away somewhere up there …

That wasn’t the only flickering.

The little flames in our bedside lamps (real lamps!) and our eyelids flickered in unison. I think our eyelids closed as we blew out those lamps and before our heads hit the pillows! It put two meanings to the term “lights out”!

Sleeping in we did, because we could and, thankfully, had it not been for the crows knocking on the roof that woke us up, we would have been more than just the slightly late that we were for our pre-arranged 9 o’clock breakfast time!

Cereal, juice, yoghurt and eggs, bacon, beans, tomatoes and fritters rounded off with hot homemade buns and filter coffee were set before us and almost sent me back to bed for more sleep!

But we had a trip to do. From the Lodge, a 4×4 entry route northwards into the Baviaans Kloof proper (which runs 120km from Willowmore in the west to Patensie in the east) provides 32 kilometres of unrivalled scenery.  We must have covered some half that distance: up and down and over and round and down and up and then, unfortunately, because of the time constraints, a u-turn and did it all again in reverse back to the Lodge! The Jeep did us proud.

This is a unique, wilderness area right on our doorstep. Each twist and turn in the road would reveal different vegetation, depending on whether it was on the windward or the leeward side of the rugged mountains. Grassy plains next to fynbos, winding rivers and streams, cycads and red and white proteas and other members of this unique plant species, geographical features, spectacular kloofs and bird life had us constantly grabbing for our cell phone cameras to take just another pic!

From the highest spot that we went to, we could see St Francis Bay away to the east and the Outeniqua Mountains at George away to the west. In between, luscious green valleys are interspersed by flat-topped plateaus and soaring blue mountain peaks.

Rob, our host, cook and guide, told us snippets about the history, the geology, the fauna, the flora, the endangered species, the secrets, the inhabitants, the rock art, the caves and the rock overhangs.

There is obviously far too much to talk about and to see and to do, and too little time to do it in!

So it was with a heavy heart that Sean and I left at two (with the kids piled in the back to return to school). But we will be back, I hope, to savour some more of this pristine, remote nature lovers’ paradise.

Our thanks are extended to Mike Proctor-Sims and Mike Holmes for conceiving the idea and to Rob le Roux and his family for hosting us and for their warm hospitality. It was a truly unforgettable experience.

If you missed this broadcast, you can listen to it now.

Go to www.edlunnon.co.za/content/18 and click on the link there.