Justice Malala, TV Presenter and Newspaper Correspondent writes in The Times today, “Our current leaders seem incapable of resolving our challenges. These are tough worrying times…”

In the same newspaper, I read the headlines

There IS NO EXCUSE!

Yes, this is but the tip of the iceberg and the headlines above apply to all our non-governmental organisations. The very associations set up and designed to provide assistance to the ill, the elderly, the children and the needy are themselves in need – often because government is remiss in providing these organisations with the financial assistance that they are budgeted and expected to do!

So the organisations turn for help to the business community (who themselves are battling to post profits) and to the ordinary man in the street (who is also battling the ravages of the current poor economic climate!)

As Justice wrote this morning, “We are going nowhere slowly.”

So it was that this weekend, the St Francis Hospice of Port Elizabeth staged its annual Last Night of the Proms at the Feather Market Centre – a fund raiser of note … literally and figuratively! … and in memory of a great Port Elizabeth benefactor, Philipp Rowland Gutsche.

This year it featured the Eastern Cape Philharmonic Orchestra conducted by Richard Cock, soloists the well-known Von Memerty Family and Musa Ngqungwana, various massed choirs from local schools and the community, the Algoa Caledonian Pipe Band and the McWilliam’s Academy of Dance.

Despite a number of other shows on in Port Elizabeth at the same time, the two shows on 1 and 2 June 2013 were a sell-out – a glowing testament to the people of Port Elizabeth for their magnificent support.

I proposed that we do a sort of retiring offering at the end of the show – asking the audience to empty their pockets for a good cause. It is a good cause – I (and the family) benefit so much from the weekly visits and support that I get from Sisters Gill, Janice and from Isaac and Jenny.

So how does one say thank you to people and an organisation like this?

I tried to do that in the two minutes that I was allowed (see previous blog: THANK YOU) and I hope that I got my message across.

But, if I didn’t, then I saw this on Facebook: Where words fail, music speaks. It surely did this weekend at The Proms! (and in the movie Les Misérables that I watched last night.)

Maybe, the flip side of government’s inability to govern allows us the opportunity to still see and enjoy fundraiser shows such as Last Night of the Proms!

Watch this space next year for another show … and book early.

Thank you again for your support!

(And in the same newspaper I read that that the Communications Minister spent R700 000 on a visit to a prize-giving in Mexico, an unauthorised shopping detour to New York, R35 000 for 2 nights at the Ritz, R10 000 for luxury car hire for 2 days, unaccounted amounts on another trip to the Face of Africa function in Nigeria, twenty other overseas trips, a R6 million management fee paid to her “spouse/boyfriend” …)

How many sick people or abused kids could be cared for out of that?

When will the people communicate with the Minister and with our government? Hopefully at the next election … or is that wishful thinking? 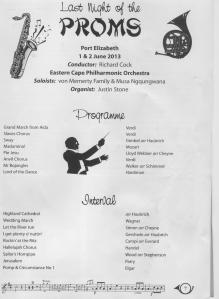