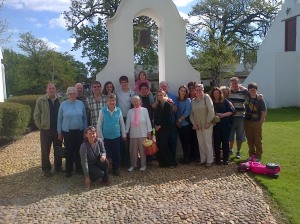 Isaac has just paid me his usual weekly visit, and we discussed our “not meeting” last week and the reason for that – I’ve been on the road again!

Last Saturday afternoon 21 September, we left Port Elizabeth headed west along the N2. This time, we had Phillip at the wheel, still operating on his learner’s licence as a result of continued strikes in the Traffic Department in Port Elizabeth.  Sean remained at home due to work commitments!

We were headed for the Western Cape in general:  Cape Town and Stellenbosch specifically.

We broke the journey after 2 ½ hours of driving in Knysna and spent the night there with our good friends Hermann and Sally Kapp. We haven’t seen them in a while so there was lots of catching up to do and many pictures to see from their recent overseas trip to Italy. Of course, with Pera having been in Italy last year, too, there were many comparisons to be made!

Sunday morning, after breakfast, we continued with our trip, stopping in George for petrol and in Riviersonderend (“River without end”) for lunch. The green fields of the Overberg interspersed with bright yellow flowers and the snow-capped blue peaks of the Western Cape mountains were a welcoming sight.

We arrived in The Strand (my hometown) at about 17h00 and offloaded our luggage at the holiday flat of our Pretoria friends, Thomas and Marzeth Moolman. This was to be home for the next week – just a block up from the white beaches of Melkbaai strand. (See the background pic of my blog.)

Then we were off to Michelle (my niece) and Sebastian Ridgway for a Sunday night braai.

On Monday morning we headed for Stellenbosch University – the real reason for our trip. First, a morning tour through Helshoogte residence (where I lived as a student) was conducted by Martin Visser (next years Primarius) and House Committee member Andre Coetzee. Then we joined the myriad of students for lunch at the Neelsie – the CJ Langenhoven Student Centre.

At 14h00, we arrived at the Engineering Faculty and met Prof Basson who spent the next two hours discussing engineering in general and mechanical and mechatronic engineering in specifics. Phillip is still not sure what he wants to study next year and where he wants to go. So all of this is to assist him to make up his mind; however, maybe it’s confusing him even more!

After drinks at the BrazenHead – to clear the minds! – we leave him “under the wing” of my niece and god daughter Jessica Scholtz. She is also from Port Elizabeth but is currently a student at Stellenbosch University. According to Jessica, it’s also important for Phill to understand the Stellenbosh nightlife, and seeing that Tuesday is a public holiday, there’s no better night than tonight!

Pera and I headed back to The Strand for supper and a visit from Sebastian and Hannah.

Tuesday, at noon, we all gathered at Lourensford Farm in Somerset West.

We all being Pera’s mother Shirley Southwood and Aunty Joan Peach (Shirley’s late brother’s wife), her brother Bruce Southwood and Fi (with their two children, Kate and Daniel) and on my side, my (late father’s last surviving sibling) Aunty Doreen and Uncle Peter Volsteedt, their son Jeremy (my cousin) and his wife Merissa, my sister Ingrid Scholtz’s two daughters and my nieces, Dr Lindsay Scholtz and Jessica (returning Phillip to us looking the worse for Stellenbosch wear!), my eldest sister Lynette  and her husband Anton Muller, their daughter and my niece Michelle and her husband Sebastian (and their daughter Hannah) Ridgway.

Twenty family members in all celebrating Heritage Day in style at one of the most scenic wine farms in the Hottentots Holland Valley! What a privilege it was to gather as family in such awesome surroundings!

On Wednesday morning, after my radio programme on AlgoaFM, ED is in Wednesday (with Tové Kane this week) we headed off for Pera’s part of the week – shopping! First to the Green Cross Factory shop in Epping and then Access Park in Kenilworth, where we were joined by Lindsay Scholtz ( who was taking a break from Frere Hospital in East London to attend a wedding in Cape Town).

Whilst at lunch at the “being revamped” Forries in Newlands, I came up with the idea that we should go and see a show!

Well, more of that later … I just can’t sit anymore … for the first time since being ill I am now starting to experience excruciating pain … chat soon! 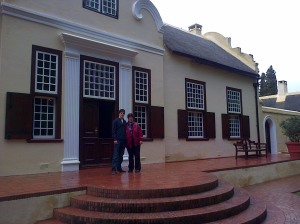