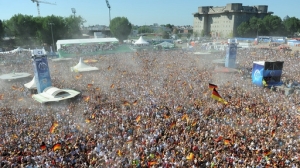 We have also become the WAGS of soccer – not the wives and girlfriends but the watchers and goers!

That’s all we have seen and done over the last few weeks. We watched the World Cup opening concert in Orlando Stadium, Johannesburg whilst we were with my sister Lynne in The Strand. We watched the Opening game in Soccer City at the Brazen Head in Stellenbosch. We’ve watched many of the games on TV in Cape Town – and even at the famous Cape Town Waterfront. 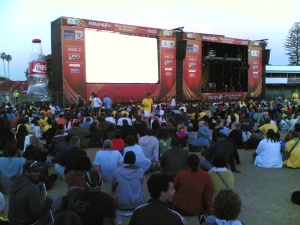 We have gone to see the German / Serbia game at the Nelson Mandela Bay Stadium in Port Elizabeth. With thousands others, we have gone to the FIFA Fan Park at George’s Park in PE to watch: Bafana Bafana beat France 2 – 1 and then bow out of the tournament, on Wednesday England beat Slovenia  1 – 0 and on Friday, Portugal draw with Brazil 0 – 0! I even watched and listened to Just Ginja at Friday’s Fan Park concert. And, in between all of this, I have watched more football on TV in the past two weeks than I have ever watched in my entire lifetime before! 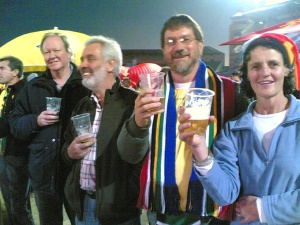 Neighbours at the Fan Park

Like so many others worldwide, I have truly got the FehVah! The Football FehVah!

But, since returning from Cape Town last weekend, I have also got some other Fehvah! And for the last week, I have felt the worst since I became ill three years and ten months ago. Despite feeling unwell, I have been pushing myself to attend and watch as much football as possible, because it won’t happen again in my lifetime and I don’t want to miss out!

And, as I have said to many people, we are going to be paying for this party for many years to come, so we’d better enjoy it while it lasts! And not being cynical, do yourself a favour and get to a Fan Park – you have to experience all the facets of this unbelievable show. When I feel better, I will write about my World Cup lessons in more detail.

I have been to see the doctors – again. I am taking more tablets – again. I am feeling miserable – again. I have a bladder infection, and whilst this may seem like a pretty ordinary occurrence for most people, in my case, it’s also one of the symptoms of the CBD that I have. As the brain loses control of the body, the bladder also becomes affected, and infections occur. So I have to be careful and can only hope that this will clear up soon. 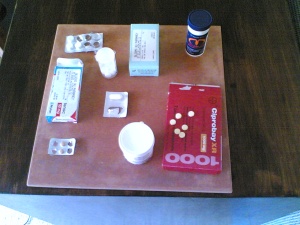 Right now, I am feeling better, but this last week has been a challenge for me. And it’s when you don’t feel well, and don’t sleep well, and feel down and tired, that’s when you have to guard most against becoming depressed. It’s so easy to slip into that whirlpool of self-pity, and to get sucked into that eddy of despair. That’s when I’m ugly and I lose my temper with those around me.  And that’s when I am not the first choice person to be around!

So? That’s when I have to focus my mind, strengthen my resolve and, once again, look at what I’ve still got, and pull myself back. Thank God for that strength, and for giving me the football at this time to keep focussed on, and to get me out of this.

As Banafa Bafana showed us these last two weeks – with focus, determination, effort and resolve, we can all be winners!

P.S.  I have just heard that my Aunty Irmela passed away this morning. She was the wife of my Uncle George Lunnon, my late father’s eldest brother. (Read The Circle of Life to see our family tree!).  My condolences are extended to my cousins Louise, Susan and Hildegarde on the passing of their mother.

who says it’s hot dogs tonight, because she is home with me, and not out with someone else;

who is on the sofa, being a couch potato, because he is home with me, and not out at the bars;

who is complaining about doing dishes, because she is at home, and not on the streets;

for the taxes i pay

because it means I am employed;

for the mess to clean after a party

because it means I have been surrounded by friends;

for the clothes that fit a little too snug

because it means I have enough to eat;

for the shadow that watches me work

because it means I am out in the sunshine;

for the lawn that needs mowing, windows that need cleaning, and gutters that need fixing

because it means I have a home;

for all the complaining i hear about the government

because it means we have freedom of speech;

for the lady behind me in church

who sings off key, because it means I can hear;

for the pile of clothing and ironing

because it means I have clothe to wear;

for weariness and aching muscles at the end of the day

because it means I have been capable of working hard;

for the alarm that goes off in the early morning hours

that I am alive.